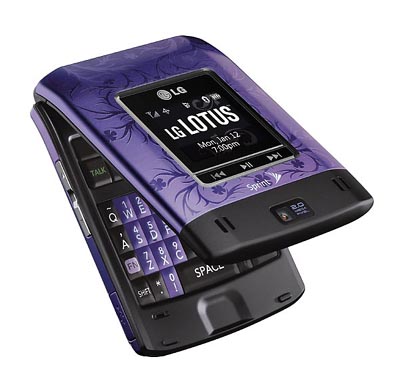 As nice as SureType on the BlackBerry Pearl 8220 may be, there’s something to be said about a full QWERTY keyboard. As such, fans of text messaging and flip phones may want to take a gander at the recently revealed LG LX600 Lotus.

Set to launch with Sprint, the LG Lotus is a somewhat chubby flip phone, but instead of having a standard numeric keypad, it actually packs a full slate of QWERTY for all your text messaging needs. Aside from the somewhat cramped QWERTY keyboard, the LG LX600 Lotus also has Bluetooth 2.0, a 2.0 megapixel camera, and a reasonably compact form factor. The purple finish will attract some ladies too, I’m sure.

Look for the LG LX600 Lotus flipping QWERTY phone to launch with Sprint this October. The proposed with-contract price is set at $149.99.