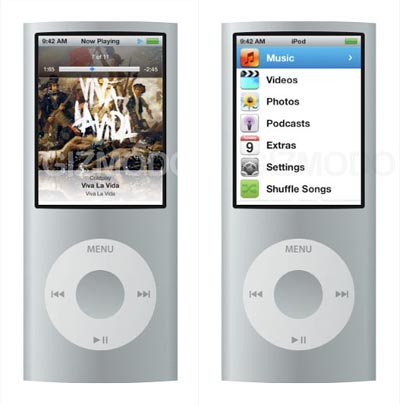 The Apple “Let’s Rock” event is set to kick off in a few short hours, but that doesn’t mean that we are going to be deprived of iPod insider information until then. You don’t need to wait for Steve Jobs to take the stage, because it seems that the goods have already been leaked onto the Internet.

First off, it seems like the elongated and curvy body that we have been seeing is very much legitimate and that will be the shape of the new iPod nano. You can also see the new user interface here. The split-screen of the 3rd-gen nano has been replaced with a picture-oriented menu.

Among other rumors, the new iPod nano will reportedly be available in 9 colors and it will be the first iPod without multi-touch that will boast an accelerometer. You activate “shuffle” by shaking the player, whereas tilting in landscape mode elicits Cover Flow scrolling. As you may have heard, the new nano will be offered in 8GB and 16GB variations.

Are these rumors going to hold up to the real world test? We’ll find out starting at 10:00 a.m. Pacific in San Francisco. That’s 1:00pm for those of you on the East Coast.