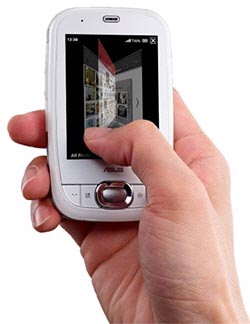 The product engineers at Asus will never own up to it, but you have to admit that the newly announced Asus P552w PDA phone with Glide UI bears a striking resemblance to the original HTC Touch. Just like its Taiwanese cousin, the Asus P552w lacks a physical keypad, opting instead for a touchscreen-based interface.

HTC has that TouchFLO thing going on, so Asus has countered with what it calls Glide UI. Both phones are powered by Windows Mobile and both phones have attempted to dress up that operating system with something a little more attractive. That said, I’d imagine the build quality on the Asus is a little better than the budget-minded HTC Touch.