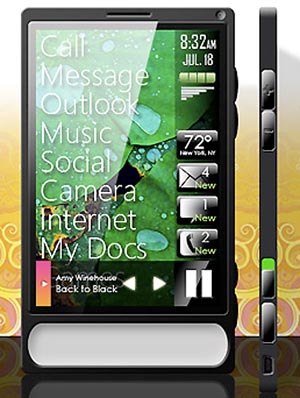 Microsoft may already be pretty well ensconced in the smartphone market with Windows Mobile, but we have yet to see any Microsoft-branded hardware out there. As we sit around to see what the Redmond, Washington company will do, we can turn to the rogue designers on the web for what they think the potential Zune phone should look like.

This concept picture does not depict a handset that is powered by Windows Mobile, instead taking on a slightly altered version of the operating system and user interface that you find on the Zune media player. As you’d expect, the Zune Phone concept boasts a large touchscreen display a la the iPhone 3G. The UI has been altered to include phone-related functions. The designer also says that this concept includes a 5 megapixel camera.

At this point, I’d say that a Zune Phone is just as likely as an Xbox Portable. Microsoft seems pretty focused on the Vista battle at this point, so the portable realm will have to take a backseat for now.