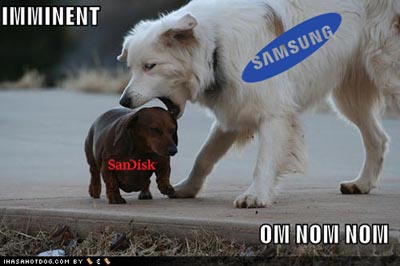 Even though Samsung is now the world’s largest maker of flash memory chips, it still has to pay royalties to SanDisk because the latter owns a whole bunch of patents. Because of these expensive royalties (and the desire for world domination), Samsung is reportedly interested in buying SanDisk outright.

As it stands, Samsung is paying SanDisk about $500 million a year in royalties. SanDisk owns patents on just about every flash memory form factor and concept known to man (pretty much), so it gets pretty expensive to use that patented information. Samsung has certainly come a long way in the last decade or so, quickly becoming one of the biggest players in electronics in general.

Because of the large market share enjoyed by both SanDisk and Samsung, the anti-trust people may take notice of this proposed acquisition. If the buyout goes through, however, you can expect flash memory prices to go up.