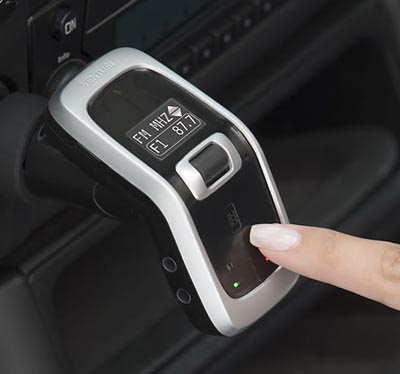 For whatever reason, I’ve been playing with a number of different FM transmitters lately, toying with offerings from companies like iLuv and Griffin Technology. In fact, you can read up on my reviews of the iTrip Auto SmartScan and the iTrip Universal if you have a few extra moments. I’ll wait for you here.

Okay, are you back? Let’s continue.

I understand why FM transmitters, like the iTrip family, were created in the first place. Most people had stereos in their cars that may be able to accept cassette tapes (remember those?) and CDs, but at the same time, portable MP3 players were starting to rise in popularity. You just weren’t cool unless you were rocking an iPod, but there was no practical (or inexpensive) way to send those tunes through your car stereo. Thus, the FM transmitter was created.

Times have changed substantially since those days, so I’ve got to wonder whether FM transmitters are still relevant today and why iPod accessory makers insist on still creating new ones on such a regular basis.

Why, oh why, would someone want to put up with an FM transmitter. Even the best in the business offer less than stellar audio quality, largely because they are restricted to the FM broadcasting standard. As a result, you can barely expect audio quality that is any better than listening to your local radio station. Yes, FM is a huge advancement over AM for music, but it’s still FM radio.

I’ve used some pretty crappy FM transmitters in my day — generic no-name $10 FM transmitters are far from the best — but I’ve also used some more expensive ones too. None of them offer anywhere near to CD-quality audio. Not even close. Generally speaking, the ones that draw power from your car’s 12V outlet are better than the units that are either self-powered or draw power from your iPod, but even those aren’t very good.

Yes, an FM transmitter is perfectly acceptable if you are simply listening to an audio podcast that consists of social commentary and other talk (like AM radio), but anything that involves music is just disappointing.

FM transmitters may be mildly more convenient, because they don’t involve any sort of real installations and certain designs don’t have any of those tangly wires, but that’s a pro that is easily outweighed by the cons of poor audio quality. It’s not like decent FM transmitters are cheap either, easily ringing in at the $50-$70 range.

One of the key advantages that FM transmitters had over other options in the past was that they were a lot less expensive. It was certainly a lot easier on your wallet to buy a $50 FM transmitter for your Apple iPod than it was to invest in a proper iPod integration kit or anything of that sort for your car.

Again, times have changed and it’s more affordable than ever to include your iPod as part of your car driving experience. Many newer vehicles come with an integrated auxiliary jack, for example, where you can plug in just about any audio source with a 3.5mm output. Heck, there are even a lot of cars, entry-level ones at that, where iPod integration is a relatively inexpensive option. The iPod-ness can even be seen in the in-dash display. Moreover, there are systems like the Ford Sync that integrate the Zune and other audio devices.

What if you have an older car and you don’t exactly have enough money kicking around to buy a new one? Just walk into your local car audio store and you’ll find that getting an iPod-ready dock isn’t all that expensive at all. Depending on the model and store, you can even take advantage of free installation. Many of these car decks either come with a built-in auxiliary jack or, if you’re lucky, iPod integration. In my experience, many of these head units can be had for under $200. That’s not too expensive at all, especially if you’re willing to dump $50 on an FM transmitter in the first place.

Are FM transmitters a dying technology? I’d say so, but as long as people keep buying them, companies will keep making them. Personally, I think you’re better off just buying an inexpensive car stereo instead.