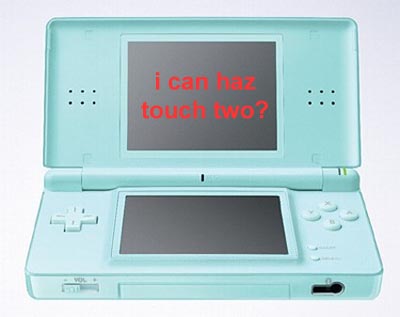 We’ve heard plenty of these rumors before, so it’s not surprise that they’re starting to sprout up again. It seems that some insider reports are pointing toward a new Nintendo DS model early next year and it seems that Nintendo is going bigger.

As I said before, the new Nintendo DS Lite could very well have larger displays in store for its mobile gaming community, but the kicker is that the top display will gain touchscreen capabilities. With the current model, only the bottom display is a touchscreen.

When asked about the refreshing of the DS Lite, Nintendo responded by saying that they are “rumour and speculation.” Well, it’s not like they’re going to confirm the rumours without some sort of official unveiling, right?