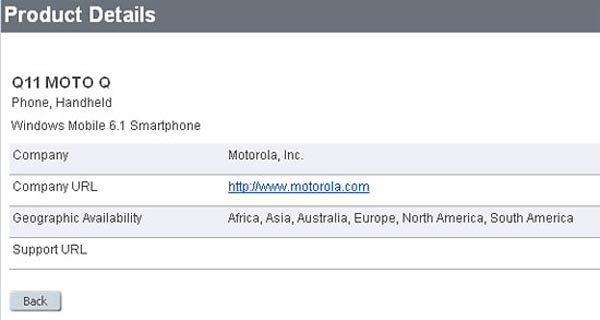 Next to no details have been revealed about this particular handset, but it appears that Motorola is hard at work on the successor to the Q9 family of smartphones. It seems that Moto is skipping the Q10 altogether in favor of a new phone called the MOTO Q11.

This is via a leaked document from within the confines of Bluetooth SIG, where they list all the certified Bluetooth products around the world. According to the leak, the Motorola MOTO Q11 will be a Windows Mobile 6.1 smartphone and it will become available in Africa, Asia, Australia, Europe, North America, and South America.

Aside from that, we basically have no information. That said, there’s a good chance that the MOTO Q11 has some relation to the recently sneak peeked Motorola Alexander and possibly the Atila as well.