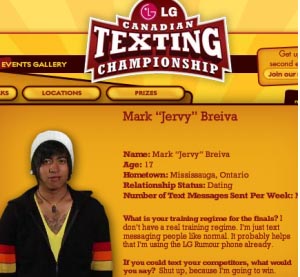 How fast are you with sending an SMS? The challenge was issued at the Canadian Texting Championships and a champion has been crowned. Not surprisingly, the top spot went to a teenager.

Mark Breiva, better known to many of his friend as “Jervy”, defeated countless others in an epic battle of text messaging supremacy. The 17-year-old hails from Mississauga, Ontario has ben awarded with $25,000 and a trip for two to Cancun.

Interestingly, Breiva says that he doesn’t like acronyms, preferring full words. This was probably a contributing factor to his victory. Oh, and in case you’re wondering, his winning phrase was “My hom is on da dnc flor.” How’s that for full words?