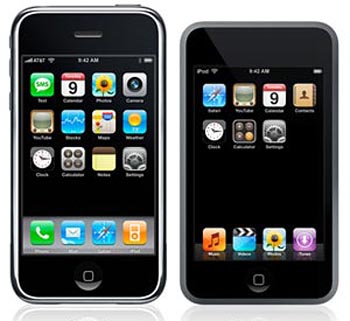 When the first Apple iPhone was revealed to the world, we were introduced to a whole new world of accelerometers, proximity sensors, multi-touch displays, and the convergence of the iPod with the cell phone. Since then, the iPhone and iPhone 3G have gone on to be resounding successes for the company based out of Cupertino, California.

Hello, iPod touch. How Do You Do?

Around the same time that we saw the Apple iPhone, we were also shown the new iPod touch. While the exact dimensions of this portable media player are slightly different than its mobile phone counterpart, the two devices were largely identical. Under both circumstances, you were offered a multi-touch display, several gigabytes of storage, and Wi-Fi connectivity. The kicker was that you could get double the capacity for the same price if you opted for the iPod touch over the Apple iPhone.

With the arrival of the iPhone 3G and all sorts of network operator subsidies, the price differential between the iPhone and the iPod touch ceased to exist. Yes, you could still look to countries where there aren’t subsidies associated with a new cell phone contract — the iPhone 3G costs about $700 in India — but by and large, the iPhone has become cheaper than the iPod touch. You just have to deal with a monthly bill. And therein lies the biggest differentiator.

Believe it or not, there are some people out there who are not prepared to pay $70 or more for their monthly cell phone bills. It might be that they don’t talk that much, so they opt for a prepaid calling plan. Maybe they live in a major metropolitan area and don’t have much need for wireless data, relying on open Wi-Fi hotspots among the concrete jungle. Whatever the case, there is still a market for a non-phone iPhone, so to speak.

While the initial purchase price for an iPhone 3G is a fair bit lower than an equivalently-equipped iPod touch, the total cost is quite a bit higher over the life of a contract. This is assuming that the user won’t opt for some sort of data and voice plan with some other phone. If you’re going to pay $70 a month anyways, then the difference in overall cost is similar (or the same).

The other differentiator, as mentioned, is increased capacity. Typically, the iPod touch is available with twice as much storage space as the iPhone. Before the subsidies kicked in for the iPhone 3G, you could buy a 16GB iPod touch for the same price as an 8GB iPhone. Unfortunately, while they can enjoy the App Store alongside all their iPhone-touting friends, iPod touch owners had to fork out a sum of money for the firmware upgrade. iPhone owners got that for free.

Does Apple Want You to Want the iPod touch?

Check out the overall marketing campaign that Apple has pushed out so far. You’ll see that your television is constantly bombarded with new commercials for the Apple iPhone 3G. From time to time, you’ll see an ad that pimps the iPod nano or iPod classic. Even though it’s not the media darling that it once was, even the iPod shuffle gets a little clippy love from time to time.

Strangely, I find very few (if any) ads for the iPod touch. Everyone knows that it exists, to be sure, but Apple doesn’t pump our minds full of a marketing blitz over the device. I get the burning suspicion that Apple isn’t terribly interested in getting you terribly interested in the iPod touch. Steve Jobs and crew would rather you pick up an iPhone instead, because they get all that residual income from your monthly subscriber fees.

If Apple does indeed want the iPod touch to be a bigger success, I feel that it is necessary to make it more different from the iPhone in some way. People that want massive capacity go for the iPod classic. Those who want something smaller choose the nano or the shuffle. Where does the iPod touch fit into this equation? It just looks like a poor man’s iPhone at this point, even if it ain’t all that cheap.

Well, here’s looking forward to the September 9th event in San Francisco. The Jobsian one should have a refreshed iPod touch for us at that time and maybe, just maybe, it’ll have a few secret tricks up its sleeve.