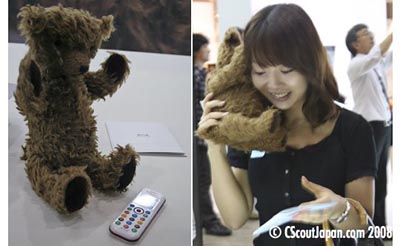 Part of the reason why some people don’t like cell phone cases is that it makes their mobile phones quite a bit clunkier. The Kuma Phone concept takes clunky to a whole new level of cute and, as such, you may not mind the extra bulk so much.

Being shown off at a Willcom design meeting at the Good Design Expo in Tokyo recently, the Kuma Phone concept really is as outrageous as you think it is. The folks at Willcom have decided to plunk a mobile phone into the cute and cuddly confines of a teddy bear. The Kuma, which means bear in Japanese, costs about $500.

This teddy bear isn’t just about looks, however, because his body is actually functional. You can assign speed dial numbers to each paw and you dial by squeezing. Heck, they even allow you to pick up and hang up by giving his tush a squeeze. No, you won’t look ridiculous at all.