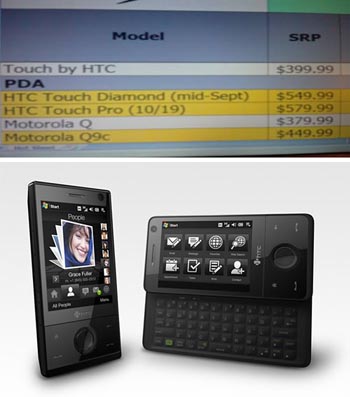 Tradition dictates that when a phone is introduced to the GSM world, the CDMA version is a little slow to follow. Such does not appear to be the case with the HTC Touch Diamond and the HTC Touch Pro. Shortly after the GSM take on the Touch Diamond was announced, guys like Telus Mobility snatched a copy in a CDMA flavor. Now the QWERTY rendition is following suit.

We already knew that the HTC Touch Diamond would be gracing the shelves at Sprint some time in mid-September, but a recent PowerPoint slide is pointing toward a mid-October launch of the HTC Touch Pro as well. According to this slide, Sprint will be getting in on the QWERTY-fied goodness on October 19th. That’s sooner than any official GSM provider in North America.

The pricing, sans contract, for the HTC Touch Pro is being slotted in at $579.99, which is $30 more than the contract-free price on the Sprint HTC Touch Diamond. I’d imagine that some hefty subsidies will be in place for those opting for a contract instead.