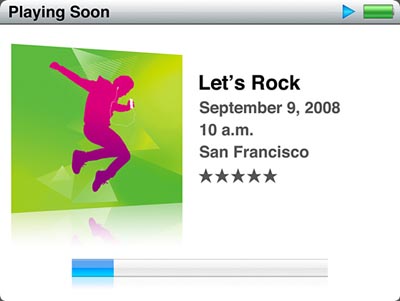 Although the invitation makes no explicit mention of a new iPod nano (and possibly refreshed iPod touch), it’s pretty clear that the event being planned for next week has a couple of announcements in store for the Apple community.

The Cupertino-sourced event, seemingly called “Let’s Rock”, has been scheduled for 10 a.m. on September 9 in San Francisco. That’s exactly one week from today, marking Tuesday morning on the calendar of Apple fanboys all around the world. If you got the invite, you’ll want to be at the Yerbu Buena Center for the Arts Theater before 10 a.m. that morning.

The invitation is not in widescreen, but the silhouette in the shot seems to be holding an elongated iPod. This is in line with previous rumors that the new nano would return to its longer and more slender form.