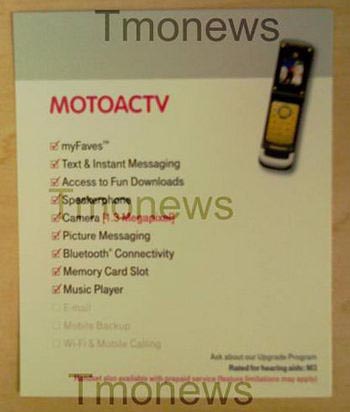 Cell phones come in a variety of colors these days and we’ve seen just about every color under the rainbow. The one tone that has largely gone under-represented in the market thus far, however, is yellow. That may change with the arrival of the MOTOACTV W450.

The current rumor has a yellow version of the Motorola flip phone making its way over to the fold at T-Mobile USA. Seeing how it is a W-series phone, you probably shouldn’t expect all that much in terms of features from the actively-inclined MOTOACTV W450. It’s a “water-resistant” phone with a media player, 1.3 megapixel camera, Bluetooth, and microSD expansion. And yes, it does myFaves too.

There’s no confirmation at this point, but word is that the MOTOACTV W450 from T-Mobile will sell for about $30-$50 when it ships later this month.