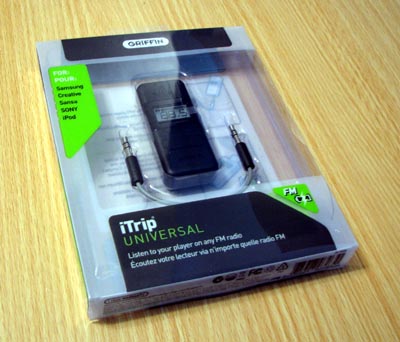 Not everyone is familiar with the Griffin Technology name, but when it comes to FM transmitters for the Apple iPod, one of the trade names that immediately comes to mind is iTrip. You can think of iTrip as the “Kleenex” or “Velcro” of the FM transmitter universe. We’ve seen more than our fair share of iTrip transmitters from Griffin, but many of these are incredibly iPod-centric. In an effort to be a little more inclusive of the rest of the portable media player market, Griffin Technology has introduced the iTrip Universal.

Instead of connecting via the standard iPod dock connector, the iTrip Universal simply makes use of a universal 3.5mm audio cable that will effectively work with just about any audio source (and not just iPods). If you’ve got something like a Sandisk Sansa, Microsoft Zune, or Creative Zen, the iTrip Universal from Griffin might be for you.

According to the official product page, the Griffin iTrip Universal comes with a rather standard set of features. It won’t floor you, but it sounds like it would get the job done.

Unlike the iTrip Auto Smartscan that I reviewed a few months ago, the iTrip Universal does not come with the ability to scan for the best FM frequencies. It’s up to you to find the one with the least amount of interference.

Some of the features on the iTrip Universal from Griffin are both a blessing and a curse. For starters, you are not bound to the 12V power jack in your automobile. This means that that the iTrip Universal can work anywhere that you are, whether it be in the car, on the street, or at the local convenience store. If you need some FM transmitting, it’ll surely come to the rescue. By the same accord, this also means that the power of the transmission isn’t quite as good. This appears to be true of all FM transmitters that don’t rely on an external power source.

It’s good to see that you can juice up that 180 mAh lithium-ion battery via a standard USB connection. In this way, you can charge your iTrip Universal at the same time that you charge your iPod. Unfortunately, there is no cap management system, so you might lose the USB cap. Also, there is no adapter for charging through a standard wall outlet, unless you invest in something like the Griffin PowerDuo Universal.

There are a few other things that I should note. You may notice that there is no power button on the iTrip Universal. That’s because this thing turns on automatically when it detects that your portable audio player is playing something. Again, another blessing and curse. Turning on doesn’t appear to be an issue, but you have to just sit and wait for the iTrip to turn itself off. I do appreciate the incredibly compact form factor of this device, though.

The Griffin iTrip Universal is controlled through a total of three buttons, all of which are located underneath the relatively small backlit display. Oh, and when they say backlit, they really only mean two tiny lights that illuminate the corners. It’s not a “true” backlit in the sense that you may think.

The three buttons are +, -, and presets. You can probably figure out how those work. Setting and selecting presets, as well as alternating between stereo and mono modes, is done through some combination of these three buttons either being pressed or held. You’ll need the provided instruction manual to understand it all, but the basics are just as straightforward as you’d expect. No complaints there.

Unfortunately, this FM transmitter does not live up to the reputation that the iTrip moniker deserves. Audio quality was quite poor, regardless of which frequency I selected on the FM dial. I tried placing the transmitter (and my iPod) in a variety of locations around the dash, but I could never get a super solid signal. There was always a slight “fuzz” to the audio being picked up. Further still, the actual quality of the sound wasn’t that great, coming off sounding “muffled”. This was true of all types of music, whether it be the rap stylings of Nas, the 90s pop rock of Oasis, or soothing ballads of Coldplay.

As far as I can tell, there are two possible suspects for this relatively poor audio quality. First, the iTrip Universal does not have an antenna that is powerful enough. This is because it’s not being plugged into the cigarette jack and the internal battery isn’t exactly adequate. Second, the audio is being fed through a 3.5mm cable rather than the iPod dock connector. This usually reduces audio quality as well.

At $39.99, the Griffin iTrip Universal isn’t exactly an inexpensive endeavor. I appreciate the relative universality of this particular FM transmitter, because it frees you from having to choose one specific MP3 player (iPod) and it frees you from the need for an external power source (like the 12V jack in your car). Unfortunately, this universality comes at a rather severe price.

It may have a nice form factor and a straightforward user interface, but the poor audio and signal quality are two very difficult things to overlook. That’s the whole reason why you’d need an FM transmitter in the first place and if it’s pumping out crappy audio (even crappier than “real” FM radio stations), then what’s the point?