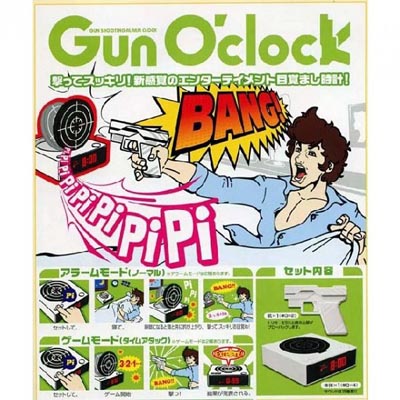 I’m not a morning person and I seem to have an ongoing conflict with my alarm clock. Some days, I just want to shoot that thing into oblivion. If I had this new alarm clock from Bandai, I could.

Instead of just slapping the snooze button on top of the alarm clock, this unit has a target that pops up when the annoying buzz-buzz goes off. At that time, you reach for the gun (included in the package) under your pillow, take aim, and hit the target. Upon doing so, you can be treated to another ten minutes of peaceful slumber.

No, it’s not a real gun and it doesn’t fire any real bullets (as far as I can tell), but at least it gets you to start your day with a spot of violence. Bandai is selling the gun and clock set for $34 in Japan and it is only available to users aged 15 and older.