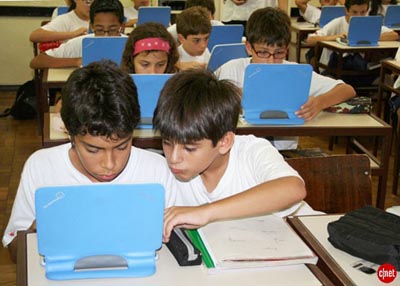 While the initial surge was brought on my Negroponte’s OLPC project, the rest of the industry is slowly starting to follow suit. The Intel Classmate PC was designed from the beginning for developing countries and now it is being deployed in the wonderful land of Brazil.

A Brazilian foundation called Fundacao Bradesco has introduced the tiny, yet reasonably functional computer into classrooms at a school in Campinas, Brazil. This follows in the footsteps of Portugal, which also recently deployed the Intel Classmate PC in its own classrooms.

Because of the relative danger and instability of the region, however, students will not be allowed to bring the notebooks home with them. Instead, they stay at the school where the computers can be a little safer (and the kids too).