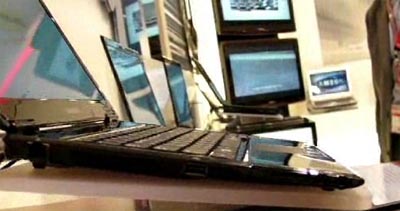 You want slim? You want sleek? You want powerful? If you’re looking for an alternative to the MacBook Air, you just may want to take a gander at the newly revealed Samsung X360 notebook. Although Sammy makes no explicit mention of its thickness, the X360 looks to be almost as thin as the Air.

Weighing in at 2.79 pounds, the Samsung X360 gets equipped with a 13.3-inch display (1200×800), direct HDMI out, three USB ports, ExpressCard, 7-in-1 card reader, external optical drive (included), and a fingerprint reader. On paper, this thing has the Air beat… unless you’re bent on using Mac OS X. If that’s the case, you’ll need to transform this into a Hackintosh.

No word on pricing or availability at this point, but if Samsung can keep it in the same range as the MacBook Air, Apple may have quite the competitor on its hands. Oh, and the Gizmodo guys have a video, if you’re interested.