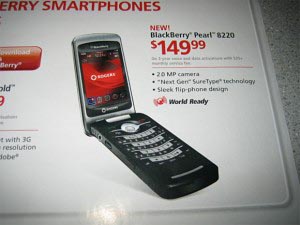 The flipping smartphone from Research in Motion that we once knew as the BlackBerry KickStart is getting ready to make its debut at Rogers Wireless. As we anxiously await its arrival, we seem to have come across a leaked flyer ad that promotes the first ever clamshell from RIM.

There’s nothing terribly exciting about this ad, per se, other than the fact that it proudly proclaims the price for the BlackBerry Kickstart BlackBerry Pearl 8220. You’ll need to sign a three-year contract to get the $149.99 asking price, of course, with the rate going up as your contract gets shorter.

Like the rest of the Pearl line, this BlackBerry is being largely marketed at the mainstream consumer. At the same time, consumers can nab the Nokia N95 for the same (or less) money and the iPhone 3G is only fifty bucks more, so I’m not sure how well it will sell.