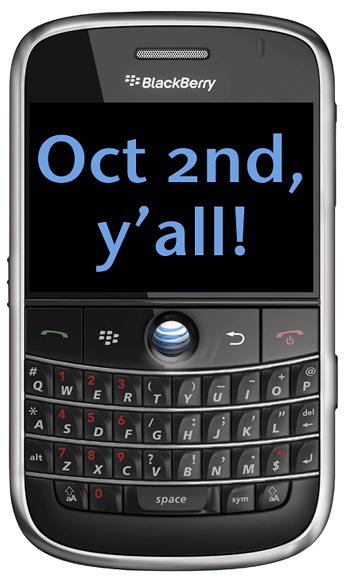 While Canada has been recently blanketed in a sea of BlackBerry Bold goodness, Americans will have to hold their horses for over a month before they can get in on the latest RIM toy. This is the latest word coming from a “pretty high source at AT&T.”

According to this unnamed and unconfirmed source, AT&T is working to have the BlackBerry Bold launch on its network on October 2nd. This isn’t to say that this is the official launch date, as it could be prone to even more delays. On the bright side, it could also mean that the Bold could launch sooner.

Oddly, October 2 falls on a Thursday, so a more formal release is probably slated for the following Monday, October 6. So yeah, all you CrackBerry addicts have some time to go.