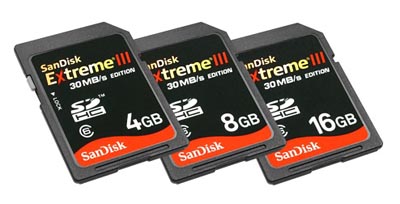 We’re taking some rather massive pictures with our cameras today, not to mention the high-definition videos being scored by a number of camcorders. We need a memory card that can keep up with that kind of pace, so SanDisk is upgrading its SDHC line into the realm of Extreme III. Much like the SanDisk Extreme III Memory Stick lineup, the SDHC versions are substantially faster than the older version.

In fact, these cards are rated at 50% faster than the old cards, pushing around that digital content at 30Mbps. Apparently that’s for both reading and writing, and not just some inflated number for the read speed. This is a “new speed record” for SanDisk.

The SanDisk Extreme III SDHC cards will be particularly good for high burst rate DSLRs. According to the company, they’ll be able to handle 39 images in continuous shooting at 4.5fps. That’s for 6.0 MB JPEG L Fine images. What about RAW?