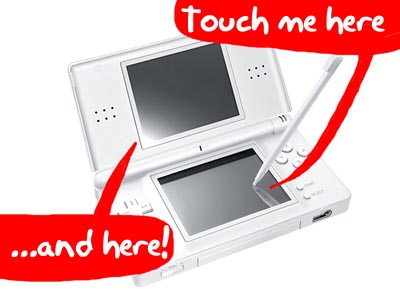 As we look toward the next-generation Nintendo DS, the rumors are running rampant as to what changes Nintendo may make. By all accounts, the Nintendo DS and DS Lite have been a resounding success and now it seems that their successor will boast not one touchscreen, but two.

The current Nintendo DS Lite only has a touchscreen on the bottom half of the handheld and the top display is just a regular screen. By expanding the touchy-feely experience to the second display, Nintendo may be able to better create Brain Age-like titles and other interactive adventures. The other rumor is that both screens will get a little bigger too.

Don’t get your hopes up too far just yet, though, because there’s no way we’re seeing a new DS before the holiday season. Even the optimistic among us are looking at an “early next year” launch window.