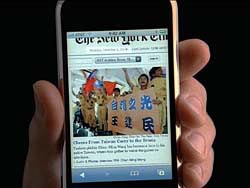 It hasn’t happened over on our shores just yet, but one or more of the iPhone TV commercials airing over in the UK have been pulled. No, it’s not because they’re inappropriate or step over some kind of boundary. Instead, the ad is “not quite true.” Apple with false advertising?

In the TV spot, you see the famous hand and fingers walk you through some of the features on the iPhone 3G and, along the way, he says something like “all the parts of the Internet are on the iPhone.” The UK Advertising Standards Authority took offense to that, because the iPhone is not able to render Flash and Java webpages, both of which are pretty integral parts to an “all the parts” experience of the web.

Apple’s rebuttal is a little weak. The Cupertino team says that the commercial refers to the availability of the webpages and not necessarily their full appearance.