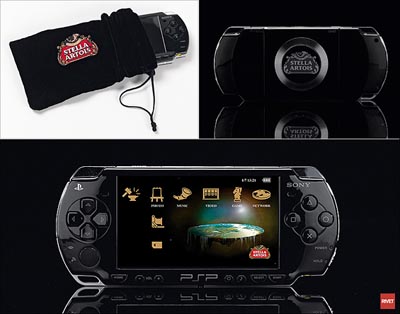 The Nintendo DS Lite has seen its fair share of special editions, including versions that are dedicated to such popular icons as Pikachu and Final Fantasy. The Sony PSP is getting the special edition treatment as well, but it’s a little more alcoholic. May I present to you the Stella Artois Edition PSP.

This beer-swilling video game machine was concocted on a limited edition basis for Fosters employees in Australia. These are the people who will be brewing the “import” Stella Artois beer for the land down under, and so this special PSP reminds them that they’re crafting some Stella and not Fosters.

I wouldn’t be surprised if a few of these showed up on the gray market, so if you like combining portable gaming with beer drinking, this might be the system for you.