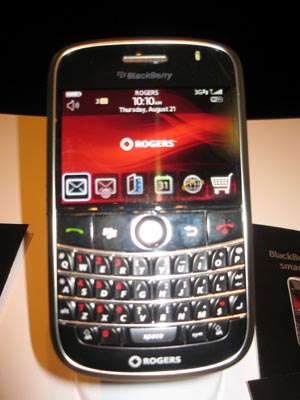 After all those delays, we caught word that the BlackBerry Bold had finally launched in Canada through Rogers Wireless. I wandered my way over to the mall today to see if all the rumours were true, and there it was in all its beautiful QWERTY greatness.

Initially, the reports said that the Bold was only available through Best Buy yesterday (Friday) and I did see it on display at the store, but the BlackBerry Bold was also being proudly promoted at the Rogers Wireless kiosk in the mall as well.

Holding the dummy unit, I found the spacing on the keys to be similar to the Motorola Q9h, but I’m not a fan of the leather back. This is supposed to provide a more luxurious feel that the cheap plastic of some other phone that you may know about. I also noticed that it felt a little wider that other data devices.

For a more in-depth analysis, check out the hands-on video below from MobileSyrup.