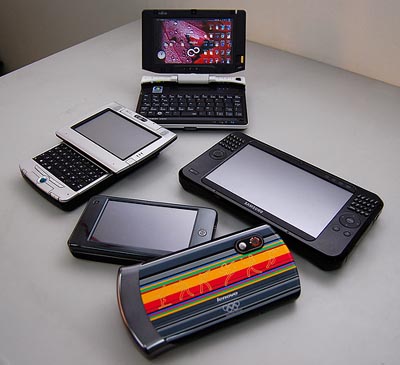 As you’ve surely noticed by now, there are a lot of options out there in terms of surfing the Internet on the go. You could do the mobile web thing on your cell phone or hop onto Safari on your iPhone, but sometimes you just need a slightly bigger display to truly experience the world wide web. At the same time, you may not be quite as interested in lugging around your full-size notebook everywhere you go. You want something a little more portable.

In terms of “in between” devices, your mobile surfing needs can be addressed by three different types of products. You’ve got the Mobile Internet Devices (MIDs), Ultra Mobile PCs (UMPCs), and subonotebooks/netbooks. What’s the difference between these devices and how do they compare to one another? Let’s have a look.

In essence, a mobile Internet device is designed solely for a single purpose: letting you surf the web on the go. Most of the MIDs on the market are being targeted squarely at the consumer market, so they typically get equipped with lower-end specs and a stripped-down operating system. The idea is that it can be lightweight and efficient, so you’ll usually find MIDs powered by Linux or some other OS.

A mobile Internet device is optimized for web surfing, but they’ll usually throw in some multimedia functionality, letting you watch movies, play music, and possibly take a few pictures too. Storage is usually pretty scarce and most MIDs don’t get displays much bigger than seven inches or so. Depending on the design, the MID may be equipped with a touchscreen, a QWERTY thumbboard, or both.

Because these MIDs are for consumers, manufacturers usually try to keep the price below the $500 threshold, though you’ll find a few units that break this glass ceiling.

Unlike the consumer-minded MID, a UMPC is designed primarily as a business device or one for power users. Instead of running a stripped-down operating system, a UMPC usually gets powered by a more powerful operating system like Windows Vista. You get an experience that is a lot closer to what you’d get on a regular computer, whether it be a desktop or a laptop.

The form factor of a UMPC is virtually identical to a MID. You usually get a touchscreen display that is between four and seven inches across the diagonal, and depending on the design, you may get a QWERTY keyboard of some kind. Some units will have the display slide upwards to reveal the keyboard, while others opt for an on-screen virtual keyboard. The specs are definitely heavier than most MIDs and you usually get pre-installed productivity tools like Word, Excel, and Outlook.

Because of the heavier specs and more powerful operating system, your typical UMPC will cost a fair bit more than the average MID. You can expect to spend anywhere from $500 to $1000 for most UMPCs, though it’s not out of the ordinary to find some that are even more expensive.

There’s largely a matter of personal preference here, but this form factor was popularized by the Asus Eee PC. Some people call them mini-laptops; others call them netbooks or subnotebooks. Whatever the case, this will be a small notebook PC with a display that measures between seven and ten inches.

These days, most subnotebooks are powered by the Intel Atom processor, but there are several that do the VIA C7-M thing as well. The critical difference between a netbook and a MID/UMPC is that the former takes on a laptop-like form factor. The display flips up to reveal a standard QWERTY keyboard. Some people prefer this shape over the other two, simply because it is more familiar (but it’s usually bigger).

Like a MID or UMPC, a subnotebook is meant to a supplementary device. For this reason, you’ll usually get stripped down specs. Most netbooks will come powered either by Windows XP or Linux; if you get into Vista and Tablet territory, it’s hard to categorize those smaller laptops as netbooks anymore.

Which One is For Me?

In the end, it boils down to personal preference and budget. If you plan on doing a lot of typing, it is probably best to look toward a netbook with a larger QWERTY keyboard. If you’re alright with a touchscreen only approach and want to keep the size as compact as possible, then a MID might be the right choice. Business users may appreciate the power and portability of a UMPC.

Then again, maybe you just want to stick to your BlackBerry or iPhone. Then you only have one thing to carry around instead of two (or three).