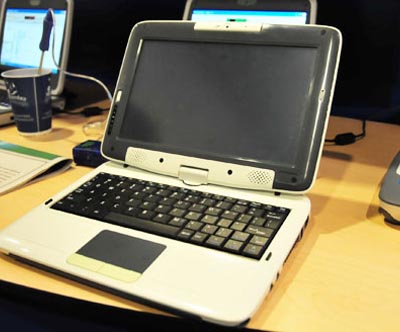 The netbook game is getting awfully crowded, but Intel is taking a slightly different approach. Instead of marketing its product as a supplementary web surfer for the tech-inclined traveler, the Intel Classmate is — as its name implies — for schoolchildren. We saw the first couple of Classmates already and now Intel has a new one for us to consider.

What you see here is the first Intel Classmate Tablet. It takes on almost the same form factor as the original rugged Classmate notebook PC, but it happens to boast Tablet PC functionality as well. Yup, that be a touchscreen there for all the young ones in the audience. The specs are slightly better than the Classmate 2.0 too.

Even though the form factor is identical with the handle and all, Gizmodo is saying that the Classmate 2 “looks admittedly dated next to the tablet. The new design takes some queues from popular netbooks like the Eee PC and the MSI Wind.” A fashionable tablet for kids. Nice.