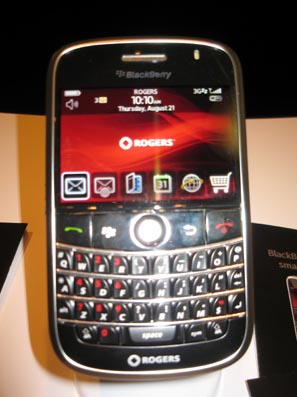 This iPhone-killing smartphone from Research in Motion was supposed to arrive a month ago. Then it got delayed. And then it got delayed again. After so much waiting, it’s terribly refreshing to hear that Rogers Wireless has finally taking the reigns off of the BlackBerry Bold, setting it loose into the wild world of BlackBerry enthusiasts. At least us Canadians get it before the States. 🙂

That’s the good news. Unfortunately, there is some slightly bad news to accompany it. While Rogers officially launched the BlackBerry Bold today (August 21), the phone is nowhere to be found. Rogers stores across the country don’t seem to have them for sale yet and there is really no explanation as to why. Don’t fret too much, however, because there is still a silver lining.

If you hop on over to a Best Buy store in Canada tomorrow, the big box electronics retailer should have the BlackBerry Bold available for sale. Just be prepared to sign your life away, because they’ll need $399.99 and a three-year contract. If you’re not into service agreements, then the BlackBerry Bold will cost you $599.99 sans contract.