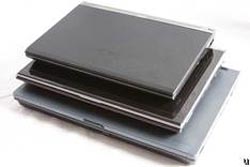 I think we have discovered the official cutoff between what is considered a subnotebook and what is considered a full laptop. Whereas you are able to buy units like the MSI Wind and Asus Eee PC 1000H with a 10.1-inch screen, the upcoming Asus N-Series notebook will feature a 10.2-inch screen… and it won’t be branded as an Eee PC. In this way, you could say that it’s a laptop and not a subnotebook/netbook.

This makes things awfully confusing for a lot of consumers, because they’ll automatically see the little laptop and assume that it’s an Eee. That said, Asus has been making 11.1-inch notebooks for some time, so bumping it down about an inch isn’t that much of a stretch. Also, because it’s not an Eee, you can expect slightly better specs at a slightly higher price. The current proposition points toward the $500 to $650 range.

The exact list of features and specifications has not been announced, but we hear that you’ll be able to make use of hard drives as big as 320GB. That should at least give you some indication.