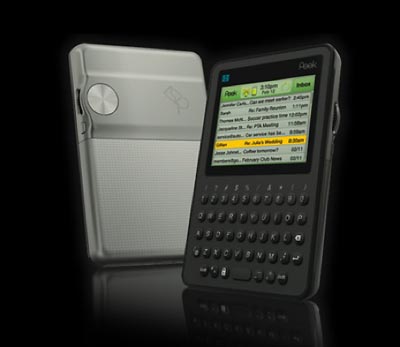 This almost feels like a quantum leap in the wrong direction. While everyone else is working to shove as much converging technology into a single device as possible, the Peek Handheld instead specializes in just one function. Taking a look at the display and QWERTY keyboard, you’ll quickly discover that the Peek is about email and nothing more.

At first glance, you could almost say that the Peek handheld has a similar kind of appeal as early BlackBerry devices. Unfortunately, it doesn’t do the voice call thing whatsoever. It wont’ surf the web, take pictures, or play music. It does email. In this era of convergence, I can’t imagine why someone would want a separate device for something like that.

If you’ve been dying for an email-only device, the Peek Handheld will run you $100 when it launches on September 14th. Look for it at Target. Oh, and the service is $15 from T-Mobile.

The monthly service will actually be priced at $19.95 and while T-Mobile is providing the data service on the back-end, the user doesn’t have a relationship or contract with T-Mobile (just a nit…).