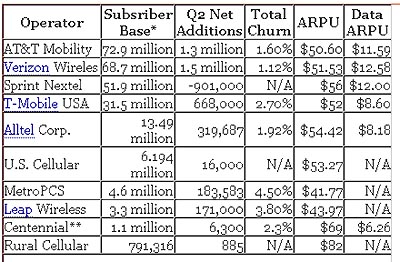 There aren’t very many surprises when you take a look at this list of the top ten American wireless service providers, but if you take a careful look at the figures, there are a few things of note. The data, as compiled by RCR News for Q2 2008, has been conveniently organized into this easy-to-read chart.

As you’d expect, AT&T sits at the top of the heap with a total of 72.9 million subscriber, including 1.2 million additions during the second quarter of this year. I’m sure that having devices like the iPhone 3G certainly helps their cause. Coming in at a very close second is Verizon Wireless, which is only four million subscribers short of AT&T, That’s a lot closer than most people give them credit for.

Perhaps the biggest downer in this list is Sprint-Nextel, the only provider in the top ten to have “negative” additions in subscribers. In fact, it looks like they lost almost a million!