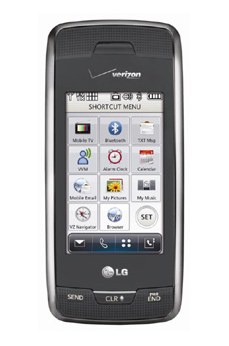 The LG Voyager received a firmware upgrade today from Verizon giving the phone Visual Voice Mail functionality, similar to that in the iPhone. The VVM application comes in a free firmware upgrade released by the company today. Owners of a Voyager can bring their cellphone into a local Verizon dealer for the free update – just make sure you backup your phone beforehand.

The firmware update gives the above mentioned Visual Voice Mail support, which costs $3 a month, as well as City ID, which costs $2 a month and gives you information on a caller’s city and state along with name when they call. Along with these additions it also includes quite a few bug fixes that previously caused the phone to lockup or perform unwanted operations.

Along with the firmware update came a color makeover for the device, as you can now purchase the Voyager in its original Black or new Titanium color. The phone is available from Verizon for $99 after rebate with a new two-year contract.