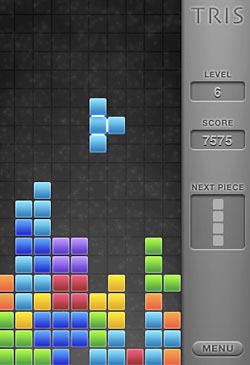 There’s no denying it. The greatest puzzle game of all time, the one that has been able to endure the ages and still pique our interest, is and always has been Tetris. We’ve played various versions of this block-tumbler on countless systems. We’ve played it on the Game Boy, the NES, the Arcade, Windows Mobile smartphones… you name it, we’ve Tetris’d it. And the iPhone is no exception.

While you could fork out 10 bucks to get the EA version of Tetris, wouldn’t be so much better to get in on some Tetris action for free? Well, that’s the price being charged for Tris, a Tetris clone that is being sold through the Apple App Store. You move the pieces around by sliding your finger and then you rotate them by tapping anywhere on the screen.

And that’s all there is to it. No fancy bells or whistles, just straight Tetris action. You can go ahead and download Tris through the App Store now. That link will automatically launch iTunes for you.