And that’s a very conservative estimate. If you’ve been watching any of the events at the 2008 Beijing Summer Olympic Games this past week, you’ve surely noticed all of the professional photographers covering the events. Each one of these guys (and gals) is lugging around thousands of dollars in gear.

In this picture alone, there are over 20 cameras. You’d assume that each photographer would have more than one lens for each DSLR body. You’d also assume that these photographers aren’t going to show up with the cheapest of gear — they are pros, after all — so the camera gear wouldn’t come cheap. If each body costs $5,000 and each lens cost about the same, it means that we are looking at a quarter million dollars in gear in this photo alone.

Given that there are 1,100 accredited photographers at the Beijing Olympics, and each of these people would be carrying at least two camera bodies and a bag full of lenses, not to mention monopods, laptops (for processing the pics), filters, lens cleaners, flashes, and all sorts of other stuff, we’d be looking at a minimum of $20,000 per photographer. That brings the total to a minimum of $22 million. Realistically, these guys probably carry closer to $50,000 in gear on average. That would bump the number closer to $50 million. Wow. 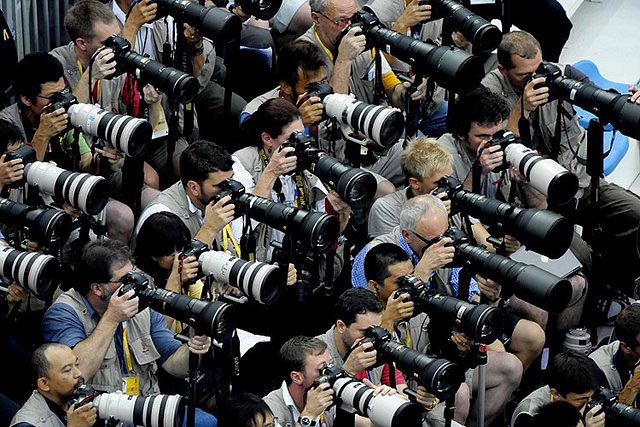