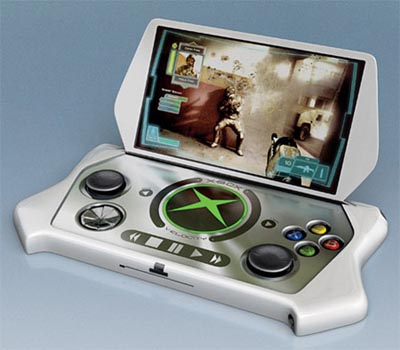 Nintendo has enjoyed nearly two decades of portable gaming success with the Game Boy line of devices, more recently printing money by way of the touchscreen-equipped Nintendo DS and DS Lite. Sony has been able to achieve a good level of success with the PSP and PSP Slim. While devices like the Sega Game Gear and Neo Geo Pocket have come and gone, their full-sized home counterparts have also come and gone.

For all intents and purposes, the Microsoft Xbox 360 is still doing very well in the marketplace. People are still more than happy to enjoy games like Halo 3 and Rock Band on the Xbox 360, so it’s clear that Microsoft has a formidable game-playing following. Why is it, then, that Microsoft has yet to grace us with any sort of portable gaming ambitions? Where is the Xbox Portable?

We’ve Heard It All Before

The former was able to see their product come to fruition, so what happened to the efforts of the latter team? Yes, we’ve seen concept pictures and mockups by fanboys, but there is nothing official coming out of Redmond that makes mention of a portable Xbox gaming console. You know they can do it. You know that they have the infrastructure and support to create a portable Xbox. But they haven’t and we don’t know why.

It seems that Microsoft is trying to be all things to all people. On one front, Microsoft is competing against the likes of Sony and Nintendo in the video game arena, pitting the Xbox 360 against the PlayStation 3 and the Wii. On another front, Microsoft has placed its Zune media player in the same market currently dominated by the iPod and iPhone.

In this way, Microsoft could be working to kill two birds with one stone. It wouldn’t be that much of a stretch to do some serious Zune games, in the same way that the App Store opened an official pipeline for iPhone gaming. Whether it be Tetris or Monkey Ball, you can game on the iPhone. Taking the jailbreak route, there are also NES and SNES emulators.

With a proper firmware (and possibly hardware) update, the Zune could handle some rudimentary games, perhaps getting distributed through Xbox Live Arcade. Simple games shouldn’t have any trouble running on a Zune. Combine Zune music and video playing with Xbox-powered gaming and you’ve got yourself a good alternative to the iPhone… without the phone part. That’s okay. There’s no Nintendo Phone or PSP Phone either.

What Form Factor Would Be Best for Xbox Portable?

At this point, it seems unlikely that we’ll be seeing an Xbox Portable any time soon. Even so, we can go ahead and pursue this pipedream, just for the sake our own imagination and curiosity. What form factor would be the most appropriate for an Xbox Portable?

Some combination of the Nintendo DS and the Sony PSP would probably be the best, I think. You can map the standard Xbox controller on the bottom half, and then have a large widescreen display that flips up in a clamshell kind of way. In the center of the controller portion, you could have a touch-sensitive section that adjusts to the current situation, like the Motorola E8. I don’t think a touchscreen is needed, nor is a full QWERTY keyboard. This is a gaming machine, not a messenger.