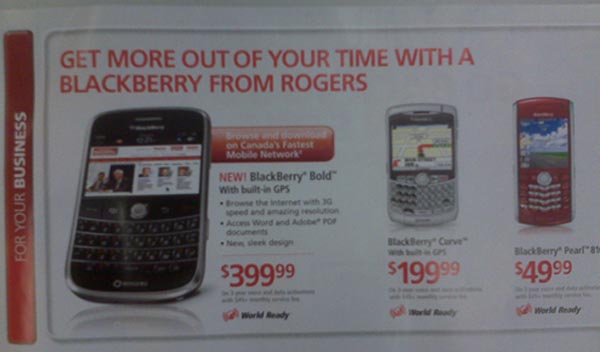 You know how some people are saying that the BlackBerry Bold will be the one true iPhone killer? Well, there seems to be a rather big hurdle in its way to glory and that happens to the price. At least for Canadians, anyway.

What you see here is a leaked flyer from Rogers Wireless, stating that the BlackBerry Bold will ring in at a hefty $399.99 with a three-year contract. Yes, it’s nice to get the latest BlackBerry before our neighbours to the south, but when you have to pay such a premium for the phone, the Bold starts to lose a little appeal. Remember that you can get an iPhone 3G for half that price.

How will this be reflected in AT&T’s pricing of the BlackBerry Bold? We’re not sure, but at least Americans don’t have to deal with three-year contracts.