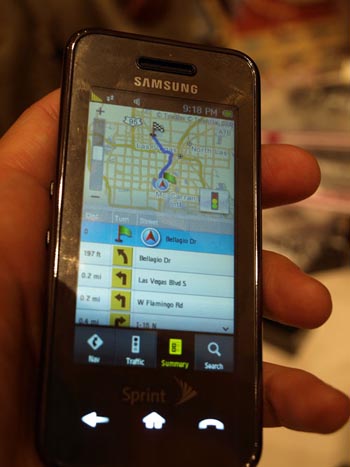 It doesn’t take a rocket scientist to figure out that the biggest trend in the cell phone world today is the touchscreen. While the Apple iPhone is far from being the first handset to boast a large touchscreen display, it has largely been credited with bucking this trend and getting everyone else to create a consumer-minded handset that lacks any sort of physical keyboard altogether.

There are certainly both advantages and disadvantages to this kind of form factor. Given that the mobile phone industry has had years to work on the design — remember the first Palm Treos and HTC smartphones? — you would think that they had ample time to come up with something that can compete directly against the iPhone. The trouble, you see, doesn’t lie in the touchscreen tech itself; it’s much more about the software and user interface.

As we look forward to the future of cell phones, should we really be sticking with the enhancement of touchscreens? Or is it a better idea to take a different direction altogether? Let us consider the strengths of weaknesses of using just a touchscreen for a mobile phone.

Situation-Specific Controls – When you consider conventional cell phones, you’re pretty restricted with how you go about controlling the different aspects of the handset. When you make use of a touchscreen, the display can adapt fully to the current situation. If you’re playing music, you have no need for a QWERTY keyboard. If you’re typing up an email, you don’t need camera controls. The touchscreen is wholly organic and can easily adapt to the current application. In this way, you have a virtually unlimited number of “buttons” at your disposal.

Freedom of Movement – This is related to the previous point and will require a little bit of software development, but the idea is that any portion of the display can be “moved” to suit the specific user. For example, while many people prefer a virtual QWERTY keyboard, others may prefer if the letters were laid out in alphabetical order. The touchscreen also makes it easy to reorganize the icons in your home menu.

Reduced Physical Size – Because the display also serves as the primary point of control, touchscreen phones can offer a significantly reduced size compared to some of its counterparts. At the same time, you can get access to a much larger display. Can you imagine if the iPhone maintained the same size screen but added a BlackBerry-style keyboard underneath? It would be pretty huge. Compared to slider phones like the TyTN II and Samsung Glyde, handsets like the HTC Touch Diamond and LG Vu are several grades smaller.

No Tactile Feedback – There’s just something to be said about hitting a physical button. For the life of me, I just can’t type as fast on something like the Samsung Instinct or Apple iPhone as I can on something with a physical QWERTY keyboard like the LG enV2 or HTC Touch Pro. I also find that it’s a lot easier dialing on a conventional numeric keypad than it is on a virtual keypad. Some handsets have tried to rectify this with haptic feedback, but it’s just not the same.

Have to Look to Touch – Yes, you probably shouldn’t be dialing and text messaging while driving, but it’s inevitable that people still want to do this. When you have a phone with a regular keypad, it’s possible to “feel” where the buttons are and to press them without looking. With a touchscreen phone, this is virtually impossible and can drastically increase the possibility of a bad motor vehicle accident.

Sensitivity and Response – When you press a button a regular phone, you know you pressed it. There’s no calibration, no mistakes. When you press a virtual button on a touchscreen phone, it’s not nearly as perfect. Again, haptic feedback can aid in this department, but it’s not on par just yet. The iPhone has good response, but I found that other touchscreens don’t respond quite as well. That’s because most devices make use of the cheaper resistive touchscreens and the iPhone has the more expensive capacitive touchscreen. You can read this article for an explanation of the difference in technology.

Now, I am speaking largely from personal preference, but I find that the best solution would be devices like the HTC Touch Pro. You still get the versatility of a touchscreen, but you also get the conventional controls of a full QWERTY keyboard. Looking to the future, I foresee devices like this getting more popular, especially as they get thinner. Thickness is what is really holding that form factor back.

Looking at older HTC phones like the Wizard and TyTN, people complained of the added bulk. If they can get it smaller and thinner, like the iPhone, then we’re totally happy. Wanna do the touchscreen thing? Fine. Want a keyboard? That’s cool too. Heck, if they can create a thin version of the Helio Ocean, everyone can be a winner.