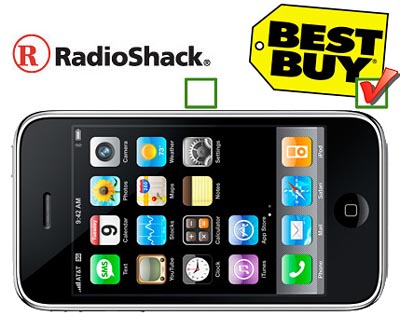 We heard some time ago that the Apple iPhone 3G would soon be sold through Best Buy and Radio Shack. While the latter is still out of luck for the time being, it has now been confirmed that Best Buy will officially be carrying the second coming of the Jesus Phone.

This isn’t exactly great news, per se, because you can already pick up the iPhone 3G from your favorite Apple or AT&T location, but it does provide you with another source of Cupertino-fueled cell phone usage. It may also authorize Best Buy to offer some sort of bonus offer or incentive of some kind. On the downside, you’ll still need to sign a new two-year contract to get the iPhone 3G.

Each and every one of Best Buy’s 986 retail stores will get the iPhone 3G on September 7. If you’re itching for a non-contract iPhone 3G, you’ll still need to wait a little longer (and fork out an extra $300).