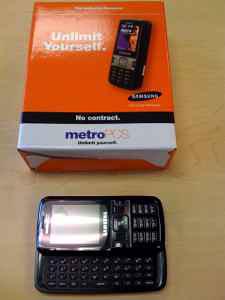 While in its closed position, the R450 looks like any other standard candybar, granting you access to a portrait-oriented display and a regular numeric keypad. Slide the phone open sideways and you’ll reveal a full QWERTY keyboard; the display will automatically orient itself in landscape mode at that time.

Other features include a 1.3 megapixel camera, Bluetooth, MP3 player, and microSD slot. Oh, and if you didn’t catch that in the first sentence, MetroPCS is calling this a messager phone, rather than a messenger phone. Don’t confuse it with a massager phone.