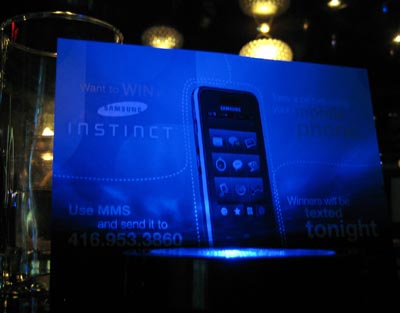 As you may recall, I had the chance to take the Samsung Instinct out for a test drive last month, but it was the version from Sprint in the United States. I went and did a full review on the iPhone competitor, comparing it against its counterparts from Apple and other touchscreen-equipped mobile phones. While the Instinct represented a bold step forward for Samsung, I concluded that it still wasn’t quite enough to dethrone the almighty Apple iPhone 3G.

After catching word that the Samsung Instinct would be coming to Canada for both Telus and Bell, I wondered how well the phone would be able to compete against the iPhone 3G from Rogers. Would Telus or Bell do anything differently from Sprint? How would they go about marketing the device and placing among its competitors?

Well, thanks to the Twittersphere and the official Canadian Instinct representative on Twitter, I was invited to the official launch party for the Samsung Instinct in Canada. I attended the Canadian part of the festivities, but I hear that similar events were held in a couple of other Canadian cities at the same time.

A few months ago, I went to the Canadian launch party for the Microsoft Zune. I couldn’t help but to draw parallels between that launch party and the one being held for the Samsung Instinct.

You see, both devices had already launched in the United States prior to making their respective ways north of the 49th parallel, so I can understand why it would be more difficult to build any kind of buzz. When I went to the Zune party, I was greeted with an empty room above some indoor skatepark and a makeshift bar that was only stocked with one brand of mediocre beer. The Microsoft branding was minimal at best and there was no formal Zune presence or presentation. Given that experience, I didn’t exactly have the highest of hopes for Samsung.

While the attendance level at the Samsung Instinct Canadian launch party wasn’t exactly impressive, the organization was a lot better. It was held at a proper club with a proper bar. Instead of being bound to a few test stations that were pushed off to the sides, you had the chance to “borrow” a Samsung Instinct to use however you’d like for about an hour. Better still, the Samsung reps were going around to answer any questions that you had and to highlight some of the critical features on the Instinct.

Feature Walkthrough and Comparison with Sprint

With most consumer-level mobile phones sold through Telus and Bell, you get hit by an equivalent level of Telus and Bell influence. They tend to hijack the operating system and toss all sorts of operator branding into the user interface. Because of my prior experience, I fully expected the operating system on the Samsung Instinct to be heavily affected by the trip to Canada.

Testing out the trial unit at the launch party, I was pleasantly surprised to see that the Canadian Samsung Instinct is virtually identical to its Sprint counterpart. The menu and icon colors were a little different, but these can probably be changed in the options. I also noticed quicklinks to Facebook and YouTube, but these are user-added options as well, rather than a carrier-specific option.

The video below will walk you through the primary menu features. If you’re looking for a more comprehensive look, my original review of the Sprint Samsung Instinct will have you covered.

Even though the Instinct can’t fully compete against the iPhone just yet — it certainly has its shortcomings — I have to hand it to the Samsung team for working so hard on the marketing side of things. They had the YouTube payout and the haiku contest among other promotions.

Reaching out to bloggers like myself through Twitter is also a definite plus. This active participation made me care about the Canadian launch of the Samsung Instinct a little more than I would have otherwise. Kudos on that front. Now if only Samsung could produce a better device to warrant that level of marketing…