Although I have never really been a fan of the user interface on Sony digital cameras, I really like their slick appearance and slim profile. Continuing with this trend are the new Sony Cyber-shot DSC-T700 and the DSC-T77. From a physical standpoint, both cameras are very similar, offering a thin shape and a fashionable look.

The higher model of the two is the Cyber-shot T700. Among the features are a 10 megapixel CCD sensor, 4x optical zoom, 3.5-inch touchscreen display. 4GB of internal memory, ISO 3200, 11 scene modes, smile shutter, face detection, and a new “anti-blink” function. The T700 will be available in your choice of red, champagne gold, pink, dark gray, and silver.

The Sony Cyber-shot T77 is slightly thinner (15mm) than the T700 (16.4mm), but its feature set is also slightly slimmed down. It gets 15MB of internal memory and a 3.0-inch LCD touchscreen. Choose from brown, green, pink, black, and silver variants.

The DSC-T700 and DSC-T77 are priced at $400 and $300, respectively. Both cameras are set for launch in North America around the end of next month. 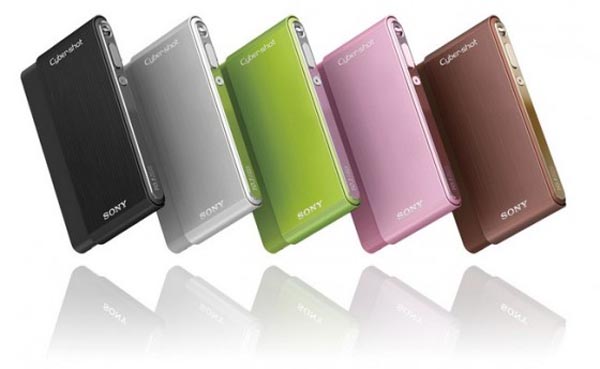