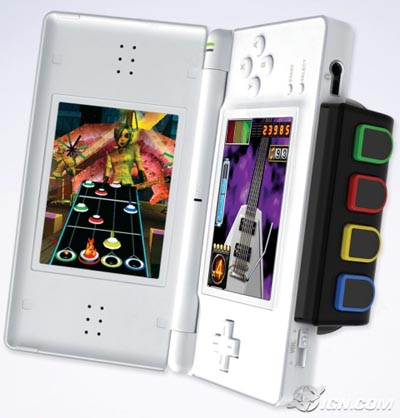 Rhythm games have really exploded onto the scene in recent years. It seems like everyone is jumping on board with games like Guitar Hero and Rock Band. Heck, I was watching The Tonight Show with Jay Leno the other night and he had Ben Stiller on as a guest. The man made famous from There’s Something About Mary even gets in on the Rock Band action, playing online with some Russian guy in his underwear. If Ben Stiller is playing Rock Band, then you know that the mainstream is all over this music game thing.

We’ve seen a huge proliferation of rhythm games filtering onto just about every major system on the planet, but we strangely have yet to experience Guitar Hero on the PSP. We’ve seen it on home consoles like the PlayStation 3 and the Xbox 360, as well as on a handheld like the Nintendo DS, but where is the Guitar Hero love for all the Sony PSP owners in the audience?

Guitar Hero is everywhere. It’s easy enough to find the rhythm game on consoles like the Nintendo Wii and the PlayStation 2, because it doesn’t take much to build a proper peripheral for those systems. Even before Guitar Hero came around, Konami was pimping its Bemani series of music games on import and modded PS2s. If you wanted some GuitarFreaks or DrumMania action at home, you could get it.

More recently, we’ve seen the launch of Guitar Hero: On Tour on the Nintendo DS. Activision was able to create a simple peripheral that plugs into the GBA slot of the DS, letting his hit four fret buttons as you strum on the touchscreen. But it doesn’t stop there for portable music enjoyment. There’s Phase for the iPod, as well as Guitar Hero mobile for cell phones. There’s even a version that has been embedded in a guitar-shaped keychain.

With all of this in mind, it really doesn’t make sense that neither Activision nor Harmonix have made a distinct effort to bring their famous rhythm game franchises to Sony’s handheld gaming machine. The game chart on Wikipedia is quite distressing for PSP owners.

Harmonix: Before Guitar Hero, There Was Amplitude

The thing is the Sony PSP is no stranger to rhythm games. There’s titles like Parappa the Rapper and Gitaroo Man that let you jam away to some tunes. The PSP will have no problem handling a proper rhythm game, so why haven’t they done it?

In a sense, they have. In another sense, not really. Before Harmonix got into the whole Guitar Hero franchise, they had a little game called Amplitude. It wasn’t a music game in the strictest sense, adding in some action elements and an almost Wipeout or F-Zero kind of feel, but the core was there. You “played” along to famous rock and hip hop tunes. You hit these gems and earned those songs. 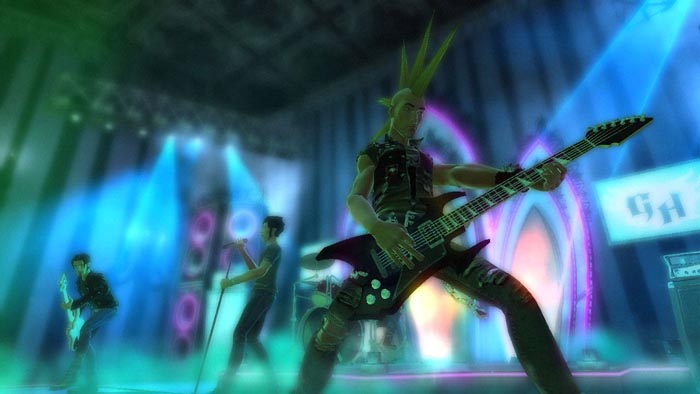 Harmonix has developed games for the PSP in the past, so they can do it again, right? I’m not exactly sure how you would choose to pull it off — using a peripheral like the DS or the existing controls on the PSP (analog stick for strumming?) — but I know it can be done. Because it has been done. Sort of.

Well, we can’t all sit around and just wait for the big boys to satiate our PSP-fueled Guitar Hero needs. That’s why you have to turn to the homebrew community for a temporary fix.

In the video below, you can see a homebrew knockoff of Guitar Hero for the PSP, called Guitarway to Heaven. The majority of the video isn’t all that exciting, just going through the track list (which includes Linkin Park, Tenacious D, Metallica, and others), but if you skip ahead to the last minute or so, you can see the game in action.

It may not be completely fair to say that this is Guitar Hero for the PSP, because the gameplay is more akin to Dance Dance Revolution. Even so, Guitarway to Heaven shows what a couple of enthusiasts can do when they put their minds to it. Imagine what a real game studio can produce.

Harmonix, Neversoft Studios, Activision, EA… if you guys are listening, then know that there is a definite market out there for Guitar Hero or Rock Band on the PSP. Online multiplayer would be a cinch too!