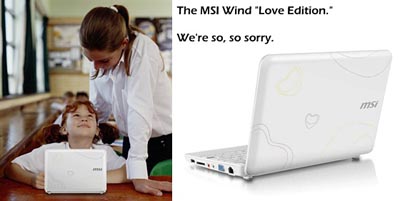 The MSI Wind is supposed to compete directly against the Asus Eee PC line of subnotebooks, but as the price continues to rise on this little netbook, its ability to lure away some customers is starting to wane. Instead of working to reduce the price on the Wind, MSI has instead decided to launch what it calls the MSI Wind “Love Edition.”

Launching the “Love with the Wind” global charity program, MSI will be offering charitable donations to a number of countries around the world, including Taiwan, China, Poland, Ukraine, Turkey, Russia, Vietnam, the Philippines, Indonesia, Korea, and India. With these donations, MSI hopes that they can help to “give poor children a chance to learn how to use computers.” Sounds almost like the OLPC project, doesn’t it?

There’s no mention of exactly how this socially responsible act will go down, but the assumption is that a portion of the proceeds from sales of the MSI Wind Love Edition will go to charity. All this proves is that MSI could sell the Wind for less.