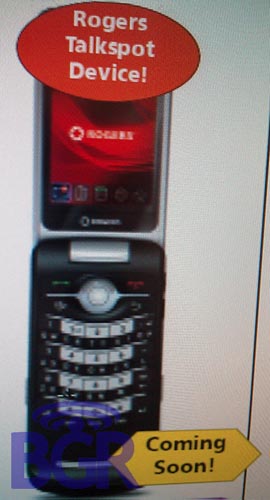 As you know, Fido has that UNO service that lets you use your mobile phone as a Wi-Fi equipped home phone. Rogers launched a similar UMA service, calling it Home Calling Zone, but that has now been rebranded as Rogers Talkspot. And it’s getting an awesome phone too.

There are two very tasty tidbits for you to munch on today. First, leaked marketing materials are pointing toward the imminent launch of the BlackBerry Kickstart with Rogers Wireless. Second, the first ever flipping BlackBerry will be fully compatible with the Rogers Talkspot UMA service, making use of the Wi-Fi radio for unlimited calls from your home wireless network.