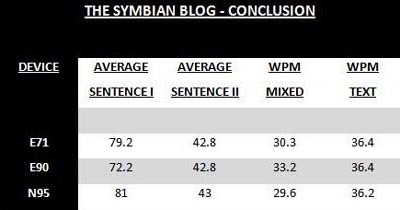 In a terribly unscientific test, the guys at The Symbian Blog wanted to find out whether it would be faster to send text messages using a T9-equipped phone or a QWERTY-equipped phone. In my own personal experience, QWERTY is just a lot more convenient, but a good T9 predictive text system could be just as fast. So, who won the unofficial shootout?

As it turns out, the difference in speed is pretty negligible across all three form factors, coming out in the neighborhood of 36 words per minute when you have text only. The Nokia E90 was marginally faster with mixed content.