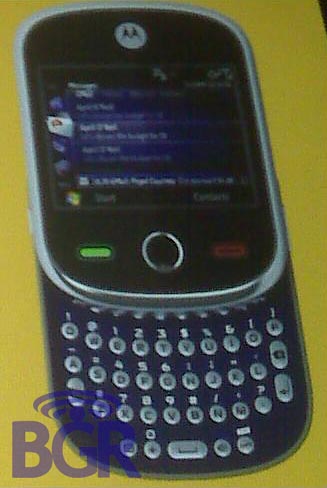 Some people say that the Motorola Alexander smartphone is going to be Moto’s white knight in shining armor. We’ve heard inklings about this handset already, but this is one of the first live pictures that we’ve been able to find of the upcoming Windows Mobile smartphone.

As you can tell, the Motorola Alexander (the name will change for sure) is a slider phone, likely with a large touchscreen display. When you slide out the bottom portion, you are treated to a full QWERTY keyboard that is probably about the same size as what you get on a BlackBerry or the Motorola Q9h. In fact, the keys remind of a Treo for some reason.

The rumored spec sheet makes mention of Windows Mobile 6.1, but it’s quite possible that Alexander will be doing the Windows Mobile 7 dance by the time it goes live. Other features include a 5-8 megapixel camera, NVIDIA chip for 3D graphics, aGPS, and a Q4 2008 release date.