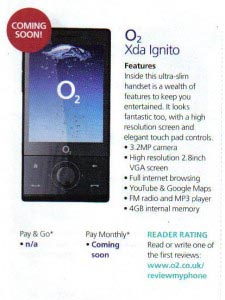 HTC is no stranger to having its phones rebranded and renamed on a regular basis. Up until a couple of years ago, it wasn’t really even possible to buy a true HTC phone, because you would only be able to pick one up as a T-Mobile, an i-mate, a Dopod, or any number of other brands that picked up on HTC-made handsets.

The HTC Touch Diamond is not immune to the renaming game either, already getting a new name from the folks at T-Mobile. Following this line of thought, the Touch Diamond has now been rechristened as the O2 XDA Ignito. By and large, the O2 take on the touchscreen smartphone will be much the same as its “real” HTC counterpart. Chalk this one up as rumor for now, but we hear that the XDA Ignito will be ready for launch this month.