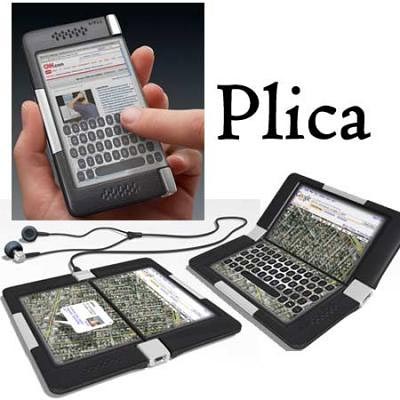 Everyone seems to be pretty excited about the Apple iPhone 3G these days. Heck, you might have even developed a hankering for other touchscreen phones like the HTC Touch Diamond, LG Vu, and Samsung Instinct. It’s obvious enough that the concept of a touchscreen phone isn’t going anywhere and manufacturers are working hard to be as innovative as possible.

The Plica is little more than just a concept at this point, but it could point toward the future of touchscreen phones. Instead of a basic candybar form factor, the Plica opens horizontally, much like the LG enV2. The difference is that the entire front face is a touchscreen, as are both sides of the inside. While in its closed position, you’ll get an iPhone-like experience. Open it up, and you can use it like a handheld laptop or lay it flat to get one continuous display.

Naturally, the Plica would make use of things like localized haptic feedback so that you get a little closer to the experience of physical keys. Far fetched? Not really. I wouldn’t be at all surprised if Nokia or some other major player came up with something like this in the next three years or so.