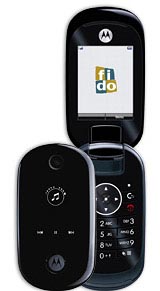 No, it’s probably not the most exciting phone to hit the Fido lineup in recent memory (a certain handset from Cupertino probably holds that title), but the Motorola MOTOROKR U9 is still a suitable mobile companion for music-minded individuals. Officially welcomed into the dog’s yard, the Motorola U9 has a PEBL-like design, doing the slight slide-then-flip thing to open up.

The exterior casing appears to feature a piano finish and a simple OLED display for keeping track of your tunes, incoming calls, and the like. There are also basic music controls on the cover, so you don’t need to open the phone to skip to the next track. Other specs include a 2-inch QVGA internal display, 2 megapixel camera, 30MB internal memory, microSD expansion, and Bluetooth.

The Motorola MOTOROKR U9 is available now from Fido for $75 with a three-year contract. The unsubsidized price is $350.