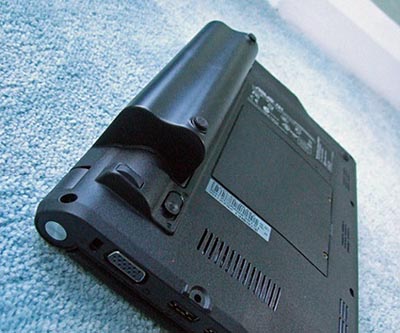 Whether you end up with an Asus Eee PC, MSI Wind, or Acer Aspire One, the vast majority of these subnotebooks suffer from less than stellar battery life. Realistically, the whole purpose of these small form factor laptops was that they were supposed to be ultra portable. They were supposed to be light and compact enough that you would have no problem tossing it into your backpack or messenger bag, carrying out the web-surfing machine with you everywhere that you go. It’s almost self-defeating when you are constantly looking for a wall outlet.

For this reason, I have compiled five tips for extending the battery life on your favorite netbook. It shouldn’t matter if you buy a HP Mini-Note, Dell Inspiron Mini, or whatever other small laptop, because these tips will still apply. Heck, even if you are bouncing around town with a larger notebook, it wouldn’t be a bad idea to pay attention too.

1. Dim That Display As Far As You Can Handle

All laptops give you the ability to set the brightness level of the notebook, so it’s a really good idea to make use of that. Yes, you may need to crank up the brightness to get a reasonable level of visibility under high-light conditions, but if you’re sitting in a coffee shop or working out of the library, it’s not necessary to have the brightness jacked to the max. This is a huge burden on the battery. It’s probably not the best idea for your eyes either. Dim that display and conserve some battery.

2. Turn Off Any Radios or Devices You Don’t Need

Depending on the model that you get, many of these subnotebooks come with additional radios that you may not be using all the time. Given their Internet-minded functionality, there’s a good chance that you’ll have the Wi-Fi on all the time, but do you really need Bluetooth? Furthermore, any USB devices that you have connected to the Eee PC or MSI Wind, for example, will be a power draw. If you can help it, avoid using external mice and other peripherals if possible. This is especially true of running higher-draw devices like USB scanners, webcams, and portable hard drives.

3. Carry An Extra Battery or Two

This will cost you a little bit of money, but real road warriors will probably want to grab an extra battery or two. This is especially true of the netbooks that only come with a three-cell battery. Let’s face it. Two hours of life just doesn’t cut it. Poke around on eBay and other sources to see if you can find inexpensive third-party batteries. Just be sure to buy from a reputable seller and keep an eye on the mAh rating.

4. Make Use of a Car Charging Accessory

I invested about $15 on a Black & Decker power inverter for my car. In effect, it translates the power coming out of the cigarette jack into what appears to be a standard wall outlet. You don’t need to break the bank with a high-wattage converter. The converter that I got only outputs 100 watts and that’s usually enough for most small consumer electronics. If you’ve got a cell phone, iPod, or some other device, it can make use of this charger as well. Keep that battery topped up while on the road!

5. Hack and Mod Your Way to Greatness

If all else fails and no one wants to come to your rescue, then you might want to take matters into your own hands. One modder decided to create his own 9-cell battery for the MSI Wind. If the math holds up, that would provide six hours of web surfing on a single charge. Asus is also promising a version of the Eee that will provide “all day power”. That’s a waiting game though.